Last weekend we attended our first family wedding since Miss O was born. Everything was lovely; the bride looked beautiful, the sun shone, the wine flowed…but bringing your toddler along for the ride really adds a certain something doesn’t it?? 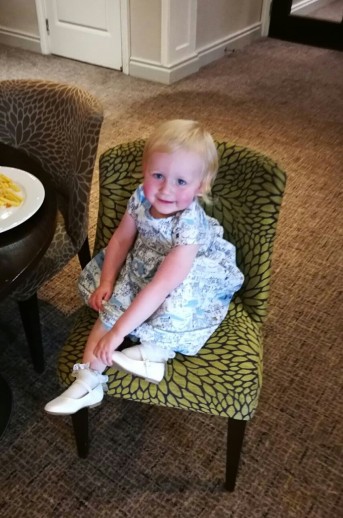 As we were staying away for 2 nights, we had to pack everything we owned, naturally, which turned loading the car up into an elaborate game of luggage Tetris. I then spent a hugely enjoyable 2.5 hours wedged between a cool bag, a travel cot and three Paw Patrol cushions watching 23,435 episodes of Bing (I thought we’d moved on from that whiny little fluff-ball and his bean bag chums, but every once in a while his popularity skyrockets again – he’s basically the Craig David of the kid’s TV world).

Anyway, we arrived at the hotel in one piece and settled in for the night. Somehow, the stars aligned and I managed to get Miss O to sleep, fuss-free, by 7.30pm – cue smug social media photos of us merrily chugging wine out of plastic glasses in the hotel hallway – “it just goes to show – it really is all about routine!” 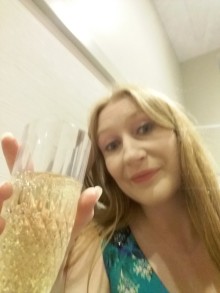 But as we all know, you should never, EVER get cocky about this parenting malarkey, because before you know it you’re wide awake in a cramped hotel room at 3:45am, watching your darling daughter prance gleefully about the place with a song in her heart and your bra on her head…

As breakfast wasn’t until EIGHT SODDING AM (that’s practically afternoon tea in parent world; what were they thinking???) J killed some time by taking her on a bleary-eyed joy ride through the local Tesco Extra, where he made the rookie error of  leaving a toddler in the same trolley as a pack of Kinder Eggs and looking away for two seconds:

(And yes, she’s still in her PJs – that’s how we roll at stupid o’clock in the morning).

Several hours later, we scored our first major victory of the day when she WILLINGLY put on her wedding outfit. She was even happy about the new shoes; usually we endure a scream-filled, snot-infested showdown in Clarks followed by weeks of her hugging her old shoes and hiding the new ones under the sofa; yet there she was, proudly shoving her latest acquisitions under the noses of bemused strangers in the hotel lobby…

So, after a quick pit-stop to load J up with as many biscuits / crackers / raisins / Tupperware treats as he could carry (he’s basically a snack mule when we go out), we were off.

The ceremony wasn’t exactly a roaring success, in that Miss O and I spent the majority of it in the toilets playing with the hand-dryer…then, she kicked off the reception with a quick succession of tantrums because I wouldn’t let her:

At this point I was tired, sweaty and very close to losing my rag, when my sister-in-law took me aside and pointed out that the only person her behaviour was really bothering was me, and to try my best to relax and just go with the flow. This can be a pretty tough ask for me, but I realised that she was completely right – we were in a crowded, unfamiliar place, completely out of Miss O’s comfort zone and regular routine, so I really needed to readjust my expectations and focus on the positives.

And there really were a lot of those.  Miss O’s awestruck expression as she took in all the twinkling lights and decorations; watching on in amazement as our usually shy little girl enthusiastically shared her snack box with the Great Grandmother she’d never even met before; watching her play Pick-up Sticks in the sunshine with her cousins (eventually this escalated to ‘attempt to impale passers-by with sticks’ so we had to intervene, but it was cute whilst it lasted). At one point, everyone was out on the lawn for photos, and the three of us were alone on the dance floor throwing some crazy shapes in that completely uninhibited way that you do when a child is leading the way, and I thought, this is pretty awesome actually!

Would we share a hotel room again? Would we f*ck. It’s Airbnb all the way next time – separate rooms and Coco Pops on tap are definite must-haves. BUT – I’d certainly be less daunted about the prospect of surviving another wedding with a tiny person in tow –  especially one who rocks a party dress/baseball cap combo as successfully as this one does: 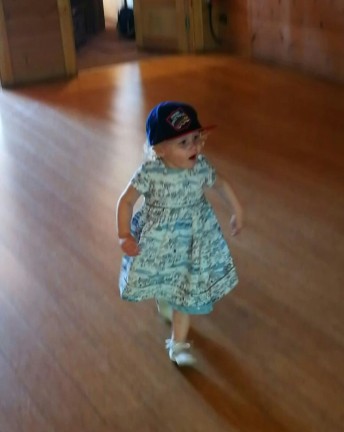 One thought on “Weddings and toddlers: a good match?”